Indian School Sur celebrated the 76th Indian Independence Day filled with patriotic fervour and pride, commemorating the enormous sacrifices of Indian freedom fighters to gain priceless freedom that reshaped our destiny. The day’s theme was ‘Nation First, Always First’ to reflect India’s standing in the world. It is crucial to remember the importance of this day and our nation’s history, embarking on Azadi Ka Amrit Mahotsav, a significant milestone in its history.

Mr Mohammed Ameen, President of the School Management Committee, was the chief guest of the day, and he was joined by Mr Srinivas Rao, the School Convener, the School Principal, Dr S Srinivasan, other esteemed members of the SMC, parents, teachers and students. 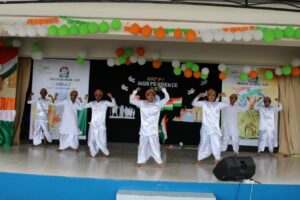 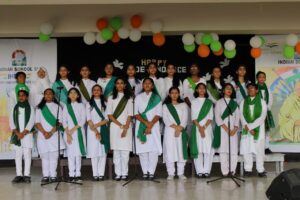 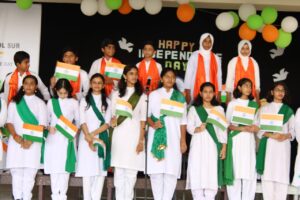 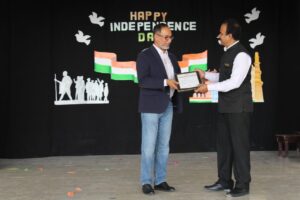 Mr Ameen addressed the gathering and delivered the Independence Day speech recalling the pain and sacrifices made by the Indian people to achieve this golden independence. He remembered that when the whole world was sceptical about the democratic form of government in India, the visionaries of India believed in themselves, making India the largest democracy in the world. Mr Ameen reminded us about the various achievement of India over these 76 years. He lauded the campaign of “Atmanirbhar Bharath and “Har Har Tiranga Abhiyan” He concluded his speech by recalling our responsibility to be compassionate for the downtrodden, needy and those of the margins.

The joyous celebration commenced with a prayer song followed by the national anthem. The welcome address was delivered by Mast. Azain Khalid of class XII. A speech in English by Ansa Joseph of class VIII recalled the fond memories of our great freedom fighters who made the brave and petrifying sacrifices to attain independence.

The tiny tots of Kindergarten presented a beautiful dance to a patriotic action song which was a feast to the eyes. This was followed by an inspiring speech in Hindi by Hifza of class VIII on the significance of the occasion.

On this memorable occasion, the CCA Team organised a thrilling inter-house event, ‘Acapella’. The musical renditions by the four houses, which sang patriotic songs, awakened everyone’s feelings towards the motherland. This was followed by a mesmerising patriotic dance performance by primary students on the profoundly positive album song ‘Vande Mataram by A R Rahman, which has been instrumental in instilling a sense of patriotic pride and national unity amongst the people of India.

The audience was awe-struck viewing the dance performance. The phrase ‘see no evil, hear no evil, speak no evil’ is adopted as a message of peace and tolerance due to Gandhiji’s visual metaphor of the three monkeys. A group of students enacted a skit titled ‘The Three Mystic Monkeys’ to extract the ideas of Gandhian principles along with a vibrant dance performance.

This was followed by a group of students from the middle and senior secondary sections showcasing a colourful performance combined with dance, drama and music on the theme ‘Tiranga’ to express our true love and total dedication to the sacrifices made by our freedom fighters and the real heroes of the nation’s defence.

The main highlight of the programme was the splendid display of Tiranga by the students, which stole the hearts of the audience. This was based on the ‘Har Ghar Tiranga’ campaign under Azadi Ka Amrit Mahotsav, which envisages aspiring Indians hoisting the national flag at their homes.

The prize distribution ceremony followed in awarding the students for their mind-blowing performances in the school’s various co-curricular activities and bestowing the medals to the meritorious students of the Olympiad examinations. The programme concluded with a vote of thanks proposed by Ms Rida of class XII.

Indeed, it was a momentous occasion, as it was a cause of celebration for every advocate of democracy. It was a day of joy to love and respect the nation and make it a better place for Indians to live and experience freedom, peace and unity in diversity.

Do you have questions?

How to apply?
How much does it cost?
Where is it?
What is the Academic Calendar?